Pianist and singer Danny Sinoff is the resident jazz cat in the hat two nights a week at JD's Bistro & Grille in Port Charlotte, but Friday night he had to share the distinction and step back a bit from the spotlight. Thirteen-year-old trumpet phenom Geoff Gallante sat in with Sinoff's trio for two sets and showed the enthusiastic crowd - and his fellow musicians - that he is  the real deal. 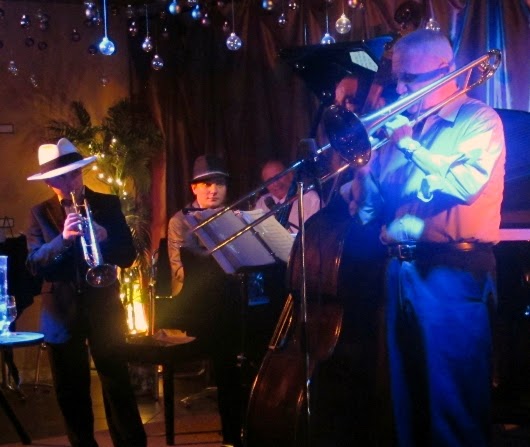 Fairfax County, Virginia resident Gallante picked up the trumpet for the first time when he was 4. He mastered it quickly. Before he was 6. he sat in with trumpeter Maynard Ferguson at Blues Alley in Washington DC. When he was 6, he became the youngest musician to perform at the White House and at the Kennedy Center for the Performing Arts. He plays at a level far beyond that reached by most high school and college musicians - and some pros, for that matter.

Along the way, he also managed to absorb the musical language and nuances of jazz, complete with the art of artful improvisation. Sinoff's trio with bassist Sherrell McCants and drummer Patricia Dean welcomed Gallante to the JD's stage for 13 jazz and American Songbook standards over two sets. Dean's husband, the very fine veteran trombonist Herb Bruce, also joined the musical adventure for the final set.

Gallante has the chops and the musical spirit of someone well beyond his years. Several in the audience mentioned that he seemed like an old soul in a young body.

Gallante and Bruce mixed it up with great enthusiasm on "Autumn Leaves," "I've Got You Under My Skin," "Perdido" and "Summertime," which opened and closed with a Beethoven piano segment - with Sinoff and Gallante doing some four-handed keyboard work.

After the band wound down the evening, Bruce talked about Gallante's talent level, minus the humor he employed on stage. "He has his music together more than a lot of pros," Bruce told me. "He was playing stuff tonight with more harmonic sophistication than I play with, and he seems to be a nice, down-to-earth kid."

The gifted teenager said his biggest jazz influences have been trumpeters Chet Baker, Clifford Brown and Harry James. He said he has absorbed the many, many jazz tunes he knows the same way other musicians do - by listening, listening and more listening.

I asked him if he ever listens to the entertainment-centric, rather forgettable, pop music that most of his teenage peers gravitate towards. "Heck no," he said. "Why would I waste the time that I have on that?"
﻿﻿﻿