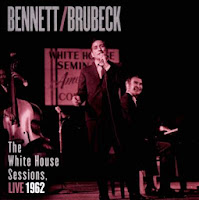 When Dave Brubeck and Tony Bennett performed a handful of tunes together at the 2009 Newport Jazz Festival, it was a reunion set up by an August 1962 shared concert in Washington DC.  The prior performance was a Kennedy Administration event for interns who’d worked that summer at the White House. Although one song (“That Old Black Magic" ) was released on a compilation, the full concert recording tapes got lost in Sony’s vaults – until after Brubeck’s death in December 2012 prompted another search at Bennett’s request.


At the base of the Washington Monument, each headliner performed a set  with his own band – and then Bennett and Brubeck collaborated on an unrehearsed four-song set backed by Brubeck rhythm mates Joe Morello on drums and Eugene Wright on bass. (Alto saxophonist Paul Desmond sat out for that portion). They performed "That Old Black Magic," "Lullaby of Broadway," "Chicago (That Toddlin' Town)," and "There Will Never Be Another You." The session has great historic value and musical value. Both men were riding high – and the program was seamless. Thankfully for us, the tapes are no longer gathering dust in some forgotten vault. 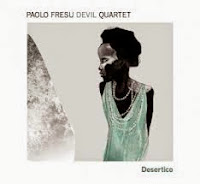 Trumpeter Paolo Fresu ought to be a household name in jazz circles in the United States. This project with his home quartet in Italy shows why. He’s one of the finest soulful and melodic trumpeters on the planet. His sound on Desertico’s range of material will at times harken to vintage Miles and at others, with his electronic effects, to Bitches Brew-era Miles. All of it is to be savored – including the opener, a rather odd cover of the Rolling Stones “(I Can’t Get No) Satisfaction.” Favorite tracks: guitarist Bebo Ferra’s “Poetto’s Sky” and Fresu’s playful “Ambre.” Give it a listen and you’ll undoubtedly find lots of satisfaction, no matter what the opening track says. 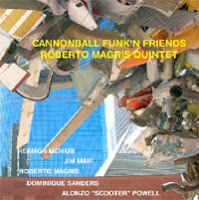 Italian jazz pianist Roberto Magris has another winner. This one is his take on the infectious funky 1960s soul jazz sound that was associated with Cannonball Adderley, among others. My favorites here: the band’s take on bassist Oscar Pettiford’s “Bohemia After Dark” (the NY jazz scene got its first Cannonball wakeup call when the alto saxophonist sat in with Pettiford’s group at Café Bohemia in 1955) and Magris’s own Cannonball-inspired funky romp, “Outback Special.” There are other choice tunes written by Duke Pearson, Frank Rosolino and Walter Booker. Magris shifts to Hammond B3 side on various tracks, adding to the project's soul  jazz flavor. He gets fine support from alto saxist Jim Mair,  trumpeter Hermon Mehari, bassist Dominique Sanders and funk drummer Alonzo "Scooter " Powell.Check it out.
Posted by Ken Franckling at 8:39 AM