One value of the jazz jam session

Jam sessions are great for a lot of things. One of my favorite values: the opportunity to hear musicians from near or far with whom one might not cross paths otherwise.
Over the past few months, I got a chance to hear Toronto guitarist André Roy at the South County Jazz Club's weekly jam, which has been held for the past year at Allegro Bistro in Venice FL.

Roy is a guitar modernist born of the rock era, and his beautiful guitar sound is infused with a rockish energy and intensity. Think John Scofield for comparisons.

At a recent jam, Roy played a beautiful version of Joaquín Rodrigo's "Adagio" from "Concierto de Aranjuez." The tune is best known in jazz circles as the grand entrance into Miles Davis's classic Sketches of Spain collaboration with Gil Evans. It's a tune that sticks with you, to be savored whenever it is done well. 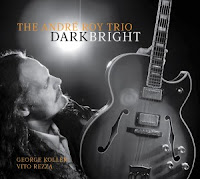 It may seen odd that Spanish music (classical and music inspired by Spanish folk forms) became such a success when given a jazz treatment, in Miles Davis's case more than 50 years ago. But perhaps not. I asked Davis about his interest in Spanish material during an April 1986 interview, a month before his 60th birthday.

He had a simple, logical answer: "Flamenco is the blues," he rasped, "only in Spanish."

Indeed. Music that comes from the heart touches you, no matter where it originated.