Scott Hamilton, now a renowned jazz tenor saxophonist, was 15, playing harmonica and leading a blues band in his hometown of Providence, Rhode Island when he first met Duke Robillard.

It was in the late 1960s, a couple of years after guitarist Duke Robillard and pianist Al Copley founded the no-holds-barred, Chicago-style blues band Roomful of Blues - and nearly a decade before Roomful's first album release.

One year after that friendship began, and the pair and their friends began sharing scads of information about classic jazz and blues that they loved, Hamilton shifted to tenor sax - and the rest is history.

In 1977, New York-based Hamilton signed a deal with Concord Records, where he made more than 40 albums. He's now a freelance musician who brings his mainstream swing style to clubs and festivals around the world from his home base in Italy. 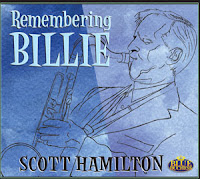 Here's where the full circle comes in. Hamilton is the latest signing to Robillard and Jesse Finkelstein's Blue Duchess record label. His first CD for the label will be out on February 26. Remembering Billie is a Robillard-produced tribute to singer Billie Holiday that features 10 tunes associated with the late singer. Hamilton is backed n the project by New England jazz stalwarts: pianist Tim Ray, bassist Dave Zinno and drummer Jim Gwin. Robillard sits in on two tracks with his acoustic guitar.

The project includes reprises of three songs that Hamilton had recorded in a Billie Holiday tribute session by singer Rosemary Clooney. That was one of Hamilton's 15 recording collaborations with Clooney when both were Concord Jazz artists.
﻿﻿

Posted by Ken Franckling at 4:04 PM