The band included bassist Dominic Mancini, guitarist Dave Trefethen and, for the second set, drummer Dane Hassan. It was an afternoon of standards, mostly performed straight ahead with some rhythmic twists.
"Get Out of Town" had a samba rhythm, while "Summer Samba" became a breezy bossa nova. Keeton's backing quartet added a bossa feel to 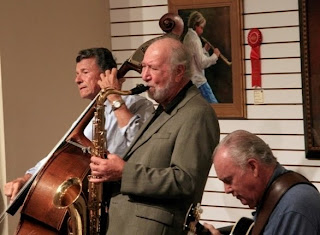 "Cherokee" to start the second set.
Highlights: Keeton's rendition of the Eartha Kitt hit "A Sunday Kind of Love," an intimate voice-and-guitar version of "Something Cool" by Keeton and Trefethen, and the singer's soulful take on "Do You Know What It Means to Miss New Orleans?" Instrumental favorites, besides "Cherokee," included "Stella by Starlight," Django Reinhardt's timeless ballad "Nuages" - another Trefethen showcase, and Wellen's wonderful balladry on "Easy to Love." 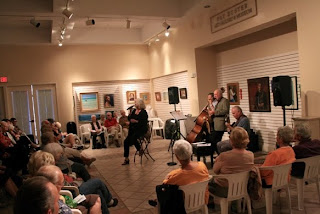 Keeton's delivery is a pleasant blend of words and scatting, in which she moves naturally between both but never overdoes the wordless improvisation. She has an uncanny sense of time that enhances the impact of her delivery - finding ways to lay back a bit or stretch notes for emphasis.
Wellen is an excellent mainstream tenor player whose forte is the standards for which players like Scott Hamilton and Harry Allen helped develop a new audience. He's always a treat to hear.
Posted by Ken Franckling at 8:43 AM