At its best, the jazz organ trio is the epitome of hard-driving, soulful swing. The groove is intoxicating. And that’s the case with this Chicago-based outfit, which features guitarist 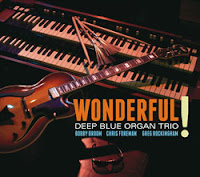 Bobby Broom, B-3 player Chris Foreman and drummer Greg Rockingham. On this project, they mine nine gems from the stellar songbook of Stevie Wonder. Their approach is terrific and their take on “My Cheri Amour” is the finest example. They dig into the Wonder classic slowly and deeply for about four minutes, each revealing a lot of melodic nuances in their improvisational exploration, before Foreman ramps it up into a spirited romp for the second half. The gospel-blues-drenched “Jesus Children of Americ” is another gem, If you’re a B-3 fan, or a likely convert, this is one to treasure.

Drummer Ralph Peterson’s first recording project since 2004 gives us, for the most part, a sense of what Art Blakey’s band might have sounded like if the Jazz Messengers had included a B-3 rather than a 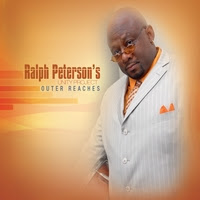 piano. This hard-driving project teams Peterson with B-3 player Pat Bianchi, trumpeter Josh Evans and saxophonist Jovan Alexandre. The session is billed as an homage to organist Larry Young’s classic 1965 Blue Note recording Unity. The stars of the show here for the most part are Peterson and B-3 rising star Pat Bianchi. Highlights include the band’s takes on Shaw’s “Katrina Ballerina,” Young’s “Ritha” and Peterson’s “Beyond My Wildest Dreams,” which is one of the leader’s three originals on this session. The dynamics change radically when freewheeling guitarist Dave Fiuczynski joins for Woody Shaw’s “Zoltan” and John McLaughlin’s “Spectrum.”

Trumpeter Mark Rapp is out with a dandy, a CD that is a tribute to the music and funky spirit of Lou Donaldson. Rapp nails it, primarily on his three brass instruments (trumpet, flugelhorn and cor 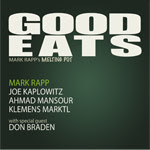 net) but also on didgeridoo for robust effect, check out his intro to “Brother Soul.” Joe Kaplowitz enhances the funky sound here with his B3 work. Guitarist Ahmad Mansour also digs into the spirit in his many solo showcases. Saxophonist Don Braden is aboard for six of the 11 tracks. The band’s versions of Donaldson’s “Alligator Boogaloo” and “Pot Belly” are standouts. So is Rapp’s own brief but spirited tribute tune, “Good Eats,” a trumpet and shuffle-beat drums duet with Klemens Marktl.
Posted by Ken Franckling at 1:44 PM