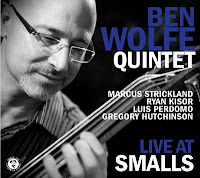 s quintet’s appearance last May at Smalls Jazz Club in Greenwich Village. The tight band includes tenor saxophonist Marcus Strickland, trumpeter Ryan Kisor, pianist Luis Perdomo and drummer Gregory Hutchinson.
The musicality and the energy are very strong here. Favorite tracks among the nine Wolff originals: “Block 11,” “Telescope,” the playful “Double Czech” and the Monkish “Unjust.” Kisor turns in a mighty solo on “For the Great Sonny Clark.” Strickland tones down his fiery tenor on the beautiful ballad “I’ll Know You More.” Kudos to Wolfe as a player, composer and leader. All three of those roles come together here.

Bill O’Connell, Rhapsody in Blue (Challenge)
Pianist Bill O’Connell has spent most of his 30-year-plus career in the Lati 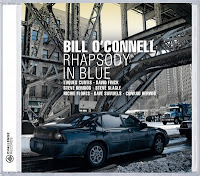 n jazz arena (Mongo Santa Maria, Dave Valentin, Gato Barbieri, the Fort Apache Band, Conrad Herwig’s “Latin Side” projects, etc.) and it has served him well. The Latin rhythms and vitality are a strong part of his music, including this fine CD. The core band, with Luques Curtis or David Finck on bass, Steve Berrios on drums and Steve Slagle on sax, is augmented by percussionist Richie Flores, vibes player Dave Samuels and trombonist Herwig on several tracks.
One of the most intriguing is the sometimes laid-back, sometimes fiery Latin lilt given to George Gershwin’s classic “Rhapsody in Blue.” There’s a lot to like here, including seven O’Connell originals. Check it out. Then repeat. I’m betting you will, because it’s that strong.
Kevin Eubanks, Zen Food (Mack Avenue)
This is guitarist Kevin Eubanks' firs release as a leader since departing "Th 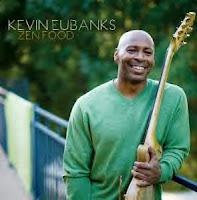 e Tonight Show with Jay Leno" after 18 years as its musical director. The CD title is a standalone, not a pickup from a track on the CD. In Eubanks' mind, it means music is food for the soul.
He's joined on this jazz buffet by drummer Marvin "Smitty" Smith, saxophonist Bill Pierce, keyboard player Gerry Etkins and bassist Rene Camacho. Favorite tracks include "The Dirty Monk," "Los Angeles," which is a very strong feature for Pierce, as well as a showcase for his sympatico with Philly native Eubanks, the leader's beautiful ballad "I Remember Loving You" and their take on Etkins' "G.G" (short for Gerry's Groove).
Posted by Ken Franckling at 8:20 PM