How do you top your 30th anniversary blowout?
At the Montreal International Jazz Festival, you don’t try to go one be

tter intentionally, you just continue to offer the wide-ranging and imaginative programming that got you to your fourth decade.
That seems to be the philosophy, and you can’t argue with success. It’s a success that can be viewed as a multi-block block party, indoors and out, that draws 2.5 million visitors to 650 concerts (370 free outdoor shows on 12 stages, 180 indoor ticketed concerts at 10 concert halls) featuring an estimated 3,000 musicians from 30 countries.
“Last year was an extraordinary year, but I think this year’s programming matches up,” says Andre Menard, the festival’s artistic director and co-founder.
This year’s 31st annual event runs June 25 to July 6 (roughly a week earlier than in 2009).
Last year’s kickoff was a free outdoor concert by Stevie Wonder that drew a crowd that seemed beyond count - with people ignoring day-long rains and streaming into the festival’s Quartier des Spectacles neighborhood just to get within sight - or at least hearing distance, of nearly a dozen large video screens set up to accommodate those who couldn’t get near the prime outdoor stage.

This year’s primary indoor draws including some terrific headline combinations.

Taj Mahal and The Fabulous Thunderbirds will team up for a blues evening at the Metropolis on June 28. On the night of July 1, Zorn will host a “Masada marathon” at the Theatre Maisonneuve that features two separate performances - each of which includes Zorn with five different bands (10 bands in all.)

This year’s edition of the acclaimed “Invitation” series spotlights four different artists with multiple nights and guests of their choosing. The four bandleaders are Italian trumpeter Paolo Fresu, French drummer MAnu Katché, pianist Robert Glasper, and Allen Toussaint (solo one night, and with Bright Mississippi the next). 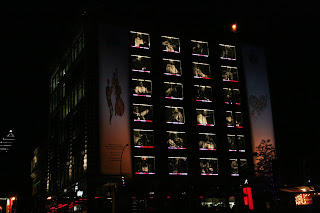 al, (located in the festival's House of Jazz, which opened last year >>>) will host jams from midnight to 4 a.m. nightly, in addition to being the site of ticketed performances earlier in the night. The outdoor free events program will be made public on June 3.

Also running in Montreal (through August 29) at the Montreal of Fine Arts is the first North American multimedia retrospective on the career of Miles Davis. The “We Want Miles” exhibition-performance, which was designed and organized by the Cité de la Musique in Paris, will also evoke some of Davis’s four memorable Montreal concerts. And this year’s concert schedule also includes Montreal trumpeter Ron DiLauro’s big band revisit of Davis’s “Porgy and Bess” project on June 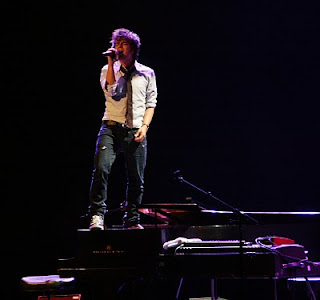 One thing is clear. The programming at Montreal never gets stale. That explains why the festival, as Menard puts it, “is now a beacon in Montreal - something people look forward to.”
Jamie Cullum at Montreal, 2009... >
According to tourism research, some 250,000 to 350,000 of the 2.5 million attendees are tourists from elsewhere in Canada, the U.S. or abroad, but he vast majority of people who flock to the festival are from greater Montreal.
Posted by Ken Franckling at 7:37 AM