The best jazz night in town

Anyone with a solid interest in the music who is within an hour of Providence RI ought to make a visit to a neighboorhood knotty-pine bar in East Providence any Monday night – and be rewarded with what is consistently the best jazz night of the week. And anyone planning a weekend visit to 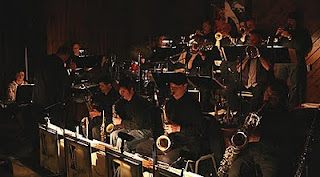 southern New England ought to stretch the trip to include a Monday night - and experience Bovi’s Tavern.

For 41 years, Bovi’s has hosted big band jazz as its Monday fare. The John Allmark Orchestra draws from an exceptionally strong and talented cadre of players from Rhode Island, Massachusetts and sometimes Connecticut, depending on who’s available to play on a normally slow weeknight for beer money.

Trumpeter Allmark, stylistically tied to the Freddie Hubbbard lineage, has a thick book of big band charts that add a hard-bop edge to swing. And he is a formidable brass arranger in his own 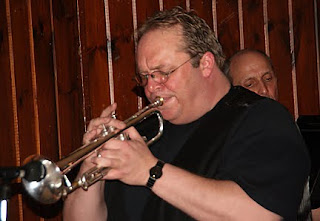 right. Any Monday, the material can vary from tunes by John Coltrane, Dizzy Gillespie, Hubbard, Oliver Nelson, Clifford Brown Thad Jones and many more, including more than a few Buddy Rich Band charts. Even when a song is revisited, you noticed that Allmark has tweaked the arrangement since the last time you heard the band do it. 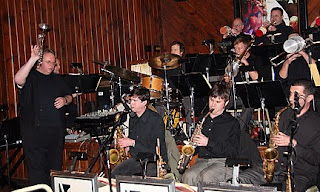 This week, on a nasty rainy night when even waterfowl didn’t want to be out traveling, the JAO still drew two-thirds of a house. As the downbeat hit for the band’s theme song, George Gershwin’s “Soon,” the 16-piece outfit was barely outnumbered by audience. But that soon changed. Soggy latecomers made their way in, forking over the $6 cover. At that price, or some would argue any price, the gig is a musical bargain.

Those who braved the weather were rewarded towards the end of the 90-minute first set with stunning version of Trane’s “Central Park West” and a friendly alto sax battle between Zaleski and Mark Pinto on Buddy Greco’s “The Rotten Kid,” a Buddy Rich band staple.

Allmark formed his band 17 years ago and worked at a variety of clubs - some less than memorable - before succeeding the Duke Belaire Orchestra at Bovi’s 11 years ago. “I think we’ve got the gig now,” he said with a chuckle. “The band keeps changing and sounding better. As soon as we start playing, it’s all good. I’m still finding new players - and great players.”

Can’t get there on a Monday anytime soon? Opt for the next-best thing. At least 20 of the band’s performances can be savored on youtube.
Posted by Ken Franckling at 6:30 PM