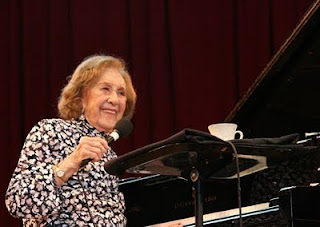 The reigning queen of jazz piano, honored through the years with numerous musical and broadcast-related awards, has another biggie – from her queen, no less.
Pianist and NPR’s “Piano Jazz” host, Marian McPartland was named an "Officer of the Order of the British Empire" by Queen Elizabeth II in her majesty’s 2010 New Year Honors, which were announced on January 1.
The Order of the British Empire recognizes distinguished service to the arts and sciences, public services outside the Civil Service and work with charitable and welfare organizations of all kinds. In this case, British-born McPartland was cited for her services to jazz and for aspiring young musicians in the United States.
"I am thrilled and proud to have received this great honor bestowed on me by Queen Elizabeth," McPartland said in a news release. "I am truly grateful."
Sir Alan Collins, British Consul-General in New York, said the award acknowledges McPartland’s significant contributions to the arts and for her role “in strengthening the U.K.-U.S. relationship."
McPartland, 91, continues to host her George Foster Peabody Award-winning NPR program, which recently marked its 30th anniversary.
She also has been inducted into the National Radio Hall of Fame and is a recipient of the Gracie Allen Award given by American Women in Radio and Television, the National Music Council's American Eagle Award, and a Grammy Trustee's Award for lifetime achievement. McPartland has received honorary degrees from Hamilton, Union and Bates Colleges, Bowling Green University and the University of South Carolina.
Congratulations are in order for this talented, genteel lady. Her musicality and sense of swing remain amazing.
Posted by Ken Franckling at 9:13 PM