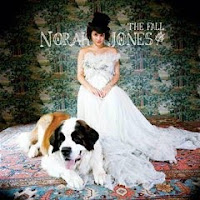 ho made such a big splash and became Blue Note’s mega-platinum gravy train in 2002, has moved away from her jazz-tinged roots into an electronic rock sensibility that will also appeal to country fans at times. In doing so, she presents new songs that in great measure are grounded in her move ahead after a breakup with boyfriend and longtime bandmate Lee Alexander. Jesse Harris, who wrote her first big hit, “Don’t Know Why,” is a co-writer on two tunes here - ”Even Though” and “Tell Yer Mama.” My favorites: “Chasing Pirates,” “Light as a Feather,” “It’s Gonna Be” and “Back to Manhattan.”

Jackie McLean protege) is a rising mid-generation tenor player on the mainstream jazz scene. His playing is formidable, both in its sense of propulsion and melodic ideas. It also exudes an R&B feel at times. The session consists primarily of originals by the leader or bandmate Avi Rothbard plus Duke Pearson’s ballad “You Know I Care” and a version of Ellington’s “I Got It Bad” that opens in mellow fashion but builds into a burner. The other players in this fine quartet are Gary Versace on organ, Rothbard on guitar and Jason Brown on drums. My favorites: “No Desert,” I Got It Bad” and “Maya’s Waltz.”


Gary Peacock - Marc Copland, Insight (Pirouet)
The bassist and pianist have developed a wonderful affinity for complementing each other’s 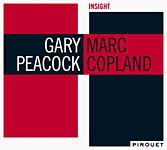 playing and improvising - and love to record together. After Peacock’s appearances on two Copland trio sessions (with Bill Stewart and Paul Motian) for Pirouet, this is their first duo adventure for the German label - and second in their 20-plus years of working together. They let the music breathe and the notes glow and resonate as they trade roles as soloist and accompanist with ease. This truly feels like a musical conversation as they explore a blend of standards and originals. My favorites: their take on Miles Davis’s “All Blues” and “Blue in Green” (a tune generally credited to Davis but likely written by Bill Evans) and Dave Brubeck’s “In Your Own Sweet Way,” as well as Copland’s “River’s Run,” Peacock’s “The Pond” and their collaborative improvisation “Late Night.”
Posted by Ken Franckling at 4:51 PM