Blue Note Records is doing it up big – again

The esteemed Blue Note jazz label loves milestone celebrations. And we are at the beginning of another.

It was 25 years ago this month that the label re-launched itself under the leadership of current President Bruce Lundvall, celebrating the revival a year later with a February 22, 1985 concert of historic proportions at Town Hall in midtown Manhattan that featured dozens of Blue Note artists past and future.

The who’s who in jazz that night included Art Blakey, Lou Donaldson, Herbie Hancock, Freddie Hubbard, Charles Lloyd, Jackie McLean, Woody Shaw, Jimmy Smith and Grover Washington Jr. The new voices included Stanley Jordan, Michel Petrucciani and Bennie Wallace. There were many more participating, including a solo performance by Cecil Taylor and a cameo walk-on by the ailing Hank Mobley. It was a stirring evening of musical moments to witness. Soon after, Sony released the concert on a two-volume video called One Night With Blue Note Preserved. 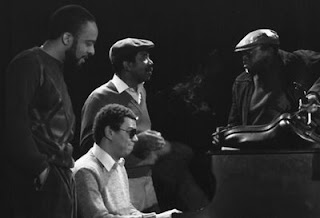 Grover Washington Jr., Jack DeJohnette, Jimmy Smith and Stanley Turrentine – One Night With Blue Note rehearsal, Feb. 21, 1985 ... >
Now, the label is marking the 25th anniversary of its rebirth as well as the 70th anniversary of its founding in 1939 by a pair of jazz-loving German immigrants, Alfred Lion and Francis Wolff, a musical commitment that spawned a historic catalog of music by many of the giants of jazz when the music was thriving.

The year will also include book releases; jazz festival spotlights in Monterey, Montreal, Newport, New York and Portland, among others; a month-long Manhattan jazz club invasion by Blue Note artists that opens in late January, a Grammy salute in Los Angeles; a series of Blue Note reissues and a newline of clothing by the company Friend or Foe featuring classic Blue Note cover art.

It has the makings of a high-visibility year. Let’s keep our fingers crossed that the effort brings more followers to – or back to – jazz.
Posted by Ken Franckling at 8:25 PM