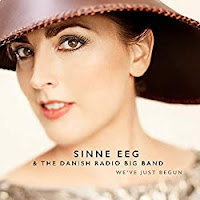 Danish singer Sinne Eeg is the real deal – a superb jazz singer, composer and lyricist. This latest project, her ninth CD since her 2003 recording debut, teams her with Copenhagen’s 19-piece Danish Radio Big Band. Favorites: her reflective ballad “Those Ordinary Things” (including lyrics co-written by Helle Hansen); “Samba Em Comum,” which considers the synergy between musicians and listeners, as Eeg alternates between Portuguese and English lyrics; and the gospel-tinged closer, “To a New Day.” Danish pianist Martin Schack wrote this one and Eeg added the words. It features a searing trumpet solo from Gerard Presencer.

In addition to presenting Eeg in a robust context, this also showcases one of Europe’s fine government-supported jazz big bands. The way they support Eeg throughout is underscored by the ensemble sound on “My Favorite Things.” This version shifts from a dreamy 5/4 feel to a fiery 4/4 segment, with solos by tenor saxophonist Frederik Menzies ajnd drummer Søren Frost. Sinne Eeg has been a jazz star in Scandinavia for two decades. We’re fortunate that she tours Europe and the U.S. to share her talent with the world at-large. 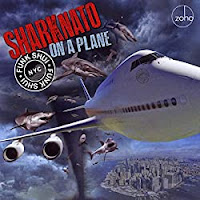 Funk Shui NYC, Sharknato on a Plane (Zoho)
Imagine the funk, no-holds-barred New Orleans outfit Bonerama if it were a big band rather than an outfit with a three-trombone front line. You’d get something quite like Funk Shui NYC, a 15-piece ensemble with a similar rock party groove. It is led by baritone saxophonist Dave Morgan and trombonist Rob Susman. The band digs with enthusiasm into some jazz, funk and rock classics, and five originals imbued with the same spirit. There’s even a cover of something rarely heard on a jazz project: the theme from TV’s “Barney Miller” series. Favorite tracks: Morgan and guitarist Noel Cohen’s “July Groove/September Funk,” George Harrison’s “Blue Jay Way” and Allen Toussaint’s “Everything I Do Gonna Be Funky.” The latter title says it all about this fine band. 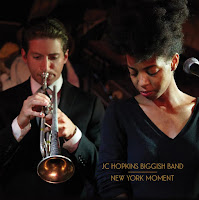 This is a splendid addition to the very rich big-band tradition, one that carries it into the present. New York-based pianist Hopkins has been swinging in various Big Apple clubs for nearly 20 years, including its current Saturday night residency at Minton’s Playhouse in Harlem. This third Biggish Band CD showcases his 11-piece band plus five singers performing 10 original tunes plus a mid-disc instrumental cover of Charles Mingus’ “Better Git It in Your Soul” that features alto saxophonist Julian Pressley. Favorites: the New Orleans shuffle beat-romp through “One of These Days” and the bluesy closer, “The Children Will Lead Us,” with vocals from guitarist Alicyn Yaffee. Tenor saxophonist Drew Vandenwinckle wrote most of the arrangements. Following 2005's Underneath a Brooklyn Moon and 2017's Meet Me at Minton's, this fresh material swings through a variety of contexts – with one foot firmly tapping in the big band era that inspired it. 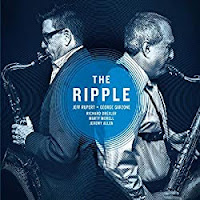 You throw a pebble into a pond and it creates a ripple effect that seems endless. A musician can have a similar impact on others influenced by his or her mastery. This project, The Ripple, honors the extended reach of the floating improvisational style, warm sound and rhythmic concepts of tenor saxophonist Lester Young. Contemporary tenor masters Jeff Rupert and George Garzone pay homage here without digging into a single composition or tune recorded by Young.

Instead, they play pieces from the repertoires of musicians that Prez influenced, including saxophonists Stan Getz, Dexter Gordon, Eddie Harris, Joe Henderson, Wayne Shorter and Zoot Sims. Quite fittingly, they included “Lester Left Town,” which then-Jazz Messengers member Shorter wrote right after learning that Prez had died. Three Rupert originals also underscore the ripple effect. They include the high-flying “GO-GO.” The ace rhythm section includes pianist Richard Drexler, bassist Jeremy Allen and drummer Marty Morell. Rupert and Garzone blend their individual styles into a compelling tenor summit, capping this exceptional session with an impromptu duet on the standard “Alone Together.”
Posted by Ken Franckling at 1:52 PM No comments:

Here's a listing of jazz-related COVID-19 deaths, updated as we receive them. Our profound sympathies to their families, friends and fans.

Posted by Ken Franckling at 8:35 AM No comments:

The 40th annual Sarasota Jazz Festival scrapped all of its main-stage concerts earlier this month because of pandemic concerns, but managed to continue a tradition that began in 1987. That tradition is the presentation of the annual Satchmo Award, which the Jazz Club of Sarasota gives to a distinguished person in the jazz community in recognition of “unique and enduring contributions to the living history of jazz.” In other words: sort of a lifetime achievement award.


This year’s honor was given to Rachel Domber and her late husband, Mat, who founder Clearwater-based Arbors Records. Since they began the label in 1989, they have produced more than 400 recordings. They began with a focus on traditional and classic jazz, but broadened the Arbors scope to include more contemporary and swing players, including a variety of today’s rising stars.


The presentation usually is part of the festival’s Saturday night main stage event. This year, the recognition came at a Thursday, March 12 reception that had been planned to precede that night’s just-canceled concert.


Jazz club president Ed Linehan praised the Dombers for their impact on jazz. “Through their efforts, Arbors has produced hundreds of albums since 1989, representing many classic styles of Jazz. The Arbors catalog reads like a Who’s Who of American jazz of the last half century, including recordings by our own Dick Hyman - an NEA Jazz Master - and (clarinetist and current festival musical director) Ken Peplowski.”

Mat Domber was a New York-based lawyer with real estate interests in Pennsylvania, West Virginia and Florida. He was also a jazz fan, record collector and listener, beginning with preteen visits to Nick’s in Greenwich Village. He and his wife founded Arbors Records as an act of generosity, creating a culture of support and kindness that continues under Rachel’s stewardship.


The impetus was their friendship with Rick Fay, a reedman, singer and composer who had been in the music business for more than 40 years, mostly performing at the Disney parks in California and Florida, but who had never recorded as a leader. Beyond making records, Arbors also produced weekend jazz parties in Clearwater, starting with bassist Bob Haggart’s 80th birthday in 1994 and continuing through 2012, when Mat died and Rachel needed some time to regroup.


"I am very thrilled to have this award and I know Mat is so very happy too,” Rachel said. “It was a surprise - and a tremendous feeling - to look at the list of other Satchmo recipients and realize that Arbors Records has recorded and supported many of them.” 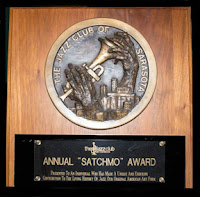 The award was named after the world's first true jazz star, Louis Armstrong, who was nicknamed "Satchmo," short for "Satchel Mouth."

Posted by Ken Franckling at 3:50 PM No comments:

The ups and downs in times of uncertainty

Jazz musicians are used to the unexpected and uncertain. In some respects, they've thrived on it - through the art of improvisation that is the essence of jazz. Pianist Cyrus Chestnut calls improvisation "composition at a rapid pace with no erasers."

But the things we're all going through now as we hunker down amid the global spread of COVID-19 is rewriting things - without erasers - to a degree we've never seen. With self-quarantines, school and college closings, nightclub closings, restaurant retrenchings, concert and festival postponements or cancellations for who knows how long, one thing is apparent.

The only certainty we have right now  is uncertainty. Musicians, many of whom live a gig-to-gig existence unless they have teaching income, are feeling the pinch of concert and club and restaurant gig cancellations.


Here's a rundown of some major developments. It is a sampling, by no means a comprehensive list.


Singer Allan Harris did one such virtual concert on March 17, which was the late Nat King Cole's birthday. His concert of music associated with Cole was a natural. Cole's "voice and mastery of the jazz piano has moved and, yes, soothed audiences and listeners around the world. In a small yet heartfelt way I will sing and hopefully bring a little joy into your heart and into your homes.," Harris wrote in a Facebook posting. "I hope that this will help to remind us that together we will overcome this pandemic."

Here is a link to a great resource that NPR compiled of live virtual concerts you can watch. It is updated regularly. 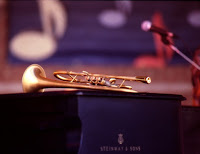 One musician friend told me today that he considers all that is going on in this disruption of our lives - socially, medically, economically - as a "reset" for society as we know it.

Jazz Club of Sarasota President Ed Linehan sees a silver lining in all of this as we grapple with so many unknowns after perhaps taking a lot of things for granted for a long time.

"Our humanity will get a booster shot," he said.
Posted by Ken Franckling at 5:44 PM No comments:

Brazilian guitarist Diego Figueiredo brought his acoustic guitar and deep musical savvy to Port Charlotte FL on Monday, March 9 in his first visit to the Charlotte County Jazz Society stage. He delivered mightily in two different contexts: a solo guitar set and a closing set in a swinging trio.

Figueiredo, 39, blended Brazilian, Latin and standard fare with ease throughout the night. There were several sambas, a few of Antonio Carlos Jobim's classic bossa novas and even the most famous Brazilian waltz, Dilermande Reis' "If She was Asks."

Everything he chose to play was imbued with eye-popping technique delivered with his finger-pick style that combines melody and bass lines, and percussive accents from his left hand sliding down the fret board. His right hand is something else, with his extra-long fingernails being the picks.

On this night, Figueiredo worked without any set list or preplanning. He walked on stage, sat down and played whatever inspired him at the moment. The night's lone original, though he has many to his credit, was a tune called "Soul" that showcased his style.

After a Spanish-tinged take on Cuban composer Osvaldo Farrés' "Perhaps, Perhaps, Perhaps," a hit back in the day for both Nat King Cole and Doris Day, he offered a five-part medley of jazz standards. “The Lady is a Tramp,” “Tea for Two,” and “Stella by Starlight” led into Pat Metheny’s instrumental classic “James.” Glenn Miller’s orchestra theme “Moonlight Serenade” closed it out. Figueiredo finished the set with a fiery take on Cuban composer Ernesto Lecuona’s flamenco homage “Malagueña.”


The second set was the intense groove portion of the evening, with Marty Morell (pianist Bill Evans’ longest-tenured drummer) and Cuban-born bassist Mauricio Rodriguez joining the program. It was Morell’s first opportunity to play with the guitarist, and only Rodriguez’ second time. They instantly locked into a swinging groove that enabled Figueiredo to focus more on melody.

Classic sambas and one bolero led to the night’s tour de force, a free improvisation in which none of the players knew where the other was headed musically.

Asking the audience to pick three musical keys (in this case B-flat, E-minor and G), Figueiredo crafted a clever instant melody on which the three players built, with each segment featuring one of those key signatures. Rodriguez’ brawny bass attack stood out here, while Morell paired one drumstick and one brush to deliver varied accents. This excursion resulted in a piece of music never heard before – and that will never be heard again. Oh, if only a tape had been rolling.

A crowd estimated at 285 turned out for the CCJS concert at the Cultural Center of Charlotte County’s William H Wakeman III Theater.

Posted by Ken Franckling at 12:27 PM No comments: