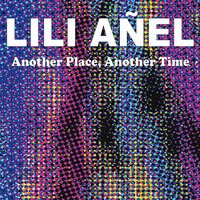 Lili Añel, Another Place, Another Time (WALL-I)
Philadelphia-based singer-guitarist Lili Añel comfortably straddles the line between jazz and folk music. She tells riveting stories in a knowing voice, taking great chances with notes and phrases as she’s wrapped in the comfort of a finely honed jazz band. Her trio includes Dale Melton on keyboards, bassist Chico Huff and drummer Jonathan Whitney. The gems on her latest project include the title track, which features special guest Larry McKenna’s conversational backing on tenor sax, and Añel’s take on Blind WiIllie Johnson’s “It’s Nobody’s Fault But Mine” (with Melton adding a bit of grit on Hammond B-3 organ). There’s also a fine version of Jef Lee Johnson’s “Traffic Jam in a One Horse Town.” 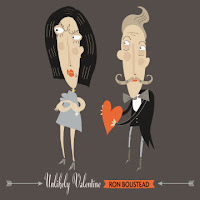 West Coaster Ron Boustead is a hipster who can swing the heck out of a song. Unlikely Valentine is an even split between familiar jazz standards and tunes that Boustead co-wrote. His nimble vocals take on a vocalese feel but he has no interest in scatting (a notion underscored on his humorous original “I Won’t Scat” (“when it’s time to blow through the changes, that’s what this band is for.”) Other gems include the title track, co-written with Bill Cunliffe (who co-produced the project with Mitchel Foreman), the wistful “Coffee,” a breezy romp through “Autumn Leaves” and a jazzy take on a most unusual tune for a jazz project: the 1960s pop hit “Love Potion #9.” He also has a fine interpretation of Bob Dorough’s “Love Came on Stealthy Fingers.” Boustead’s band features an ace L.A. horn section with Bob Sheppard on saxophones and flute, Bob McChesney on trombone and Ron Stout on flugelhorn. 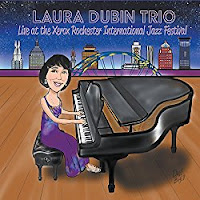 Laura Dubin Trio, Live at the Xerox Rochester International Jazz Festival (self-produced) When it comes to the skillful art of jazz piano, Laura Dubin takes no prisoners. She’s an imaginative player who kills it on every tune. She lapses into delicacy here and there, but favors the powerhouse side. That’s no surprise, since her major influences include Oscar Peterson and McCoy Tyner. This two-CD set, recorded at last summer’s major jazz festival in her upstate New York hometown, feels like a personal survey of 20th century jazz piano styles – with occasional forays into re-imagined European classical music. In addition to the standards, it includes 10 originals, most of them inspired by some of her piano heroes. Dubin gets solid support throughout the project from drummer/husband Antonio H. Guerrero and bassist Kieran Hanlon.

Favorites include her Tyner-ish original “Thunderstorm,” her scorching take on Michel Camilo’s “On Fire,” a Chick Corea medley blending “No Mystery,” “Now He Sings, Now He Sobs” and “Spain,” and her delicate Bill Evans tribute, “Waltz for Bill,” which segues into her interpretation of Cole Porter’s “It’s De-Lovely.” One of Dubin’s more unusual jazz-and-classical medleys pairs Ravel’s “Prelude from Le Tombrau de Couperin” with her Latinized take on “My Favorite Things.” It will be interesting to see how Dubin’s sound evolves as she settles into a more personal style. 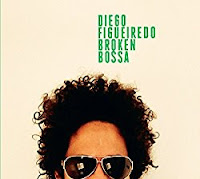 Diego Figueiredo, Broken Bossa (Stunt)
Brazilian guitarist Diego Figueiredo is an astonishing master of his instrument, simultaneously exuding unbridled musicality and sheer joy. On this newest project, recorded two summers ago in Copenhagen, we hear him playing solo and in a splendid variety of duo and trio formats. Those duos and trios are particularly intriguing because they showcase Figueiredo’s skills as a conversationalist responding to the other performers.

He teams with tenor saxophonist George Garzone and singer Cyrille Aimée on the wistful Sidney Bechet ballad “Si Tu Vois Ma Mere” and later performs in duo format with Aimée on “Caravan” and Garzone on his own composition “Flor Azul.” One of the more unusual trios teams him with Paolo Russo on bandoneon and Ruslan Vilensky on cello on a Portuguese fado-inspired original, the exotic “Fadinho.” The upbeat title track features the guitarist with subtle support from bassist Romulo Duarte. Solo spotlights include his tunes “Lelê” and “Samba dos Três Dragões” (Samba of the Three Dragons), and Antonio Carlos Jobim’s “Doralice.” Each of them reveals his technique of simultaneously playing melody, harmony and bass lines. 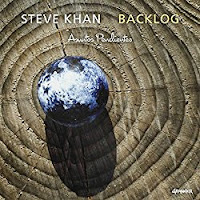 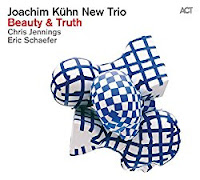 German pianist Joachim Kühn loves to take familiar melodies and transform them into something original through his improvisations. He did that for three decades with his original trio with Jean-François Jenny-Clark and drummer Daniel Humair. Now he’s doing so with his new trio with bassist Chris Jennings and drummer Eric Schaefer. In addition to a solo piano take on onetime band-mate Ornette Coleman’s “Beauty and Truth,” Kühn  digs into a bit of Gershwin (“Summertime”) and Gil Evans (“Blues for Pablo”). The material from non-jazz sources includes Stand High Patrol’s reggae-dub track “Sleep On It” and two tunes from The Doors: “The End” and “Rides on the Storm.” He also recasts Krzysztof Komeda’s “Kattorna” and “Sleep Safe and Warm,” a melody from Roman Polanski’s film “Rosemary’s Baby.” This is powerful stuff. 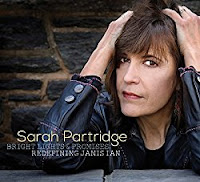 This is a most unusual project and perhaps long overdue. On this, her fifth recording, New York-based singer Sarah Partridge explores the songbook of folk and pop singer Janis Ian, putting each in as jazz context with her own interpretations and excellent improvisations from her band. It includes producer/pianist Allen Farnham, bassist Bill Moring, drummer Tim Horner, trombonist Ben Williams, saxophonist Scott Robinson and guitarists Paul Meyers and Ben Stein.

Partridge and Ian co-wrote two new songs here: “Somebody’s Child” (about homeless men and women) and “A Quarter Past Heartache.” Musical poet Ian also shares her vocals on the latter, a swinging, offbeat song about a breakup. (“I tried to swing a melody, you never could keep time.”) In addition to Ian’s classics from the 1960s and ‘70s, including “Society’s Child,” “At Seventeen” and some tasty scatting on "Silly Habits,"  Partridge tackles some of her newer material. “Matthew” is about the 1998 gay hate-crime beating death of Matthew Shepard. Annotator Didier Deutsch calls it “a modern-day ‘Strange Fruit.’” It’s powerful. The project includes the first recording of a new Ian-penned love song called “Forever and a Day.” It’s a beauty. 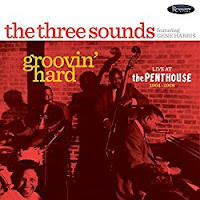 The Three Sounds, Groovin’ Hard: Live at the Penthouse 1964-1968 (Resonance)
This recording is a must for jazz lovers who miss the bluesy, funky, soulful piano playing of the late Gene Harris. These are live recordings that Harris and his trio, The Three Sounds, made during four separate engagements at Seattle’s defunct jazz club, The Penthouse. It teams Harris with bassist Andy Simpkins and a succession of drummers: Bill Dowdy, Carl Burnett and Kalil Madi. Favorites: a Harris original, “Blue Genes,” and two compositions that have not been released before on any other Three Sounds recordings: Harris’ “Rat Down Front” and Toots Thielemans’ “Bluesette.”
Posted by Ken Franckling at 5:12 PM