In a February 11 southern New England performance in support of its self-produced debut CD, Coolidge Returns, and preview of tunes written and recorded for the trio’s sophomore project, CAST (as they abbreviate their grouping) was impressive. 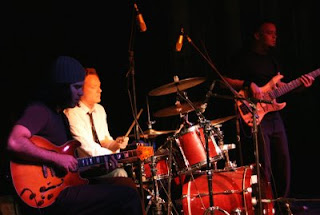 Coryell Auger Sample Trio, Feb. 11, 2008 ... >
They have an affinity for improvisation and strong interaction. They say that was evident when the first sat down as a group in August 2007 – and developed the music for the project in four hours. They haven’t slowed a bit, describing their collaboration as prolific ever since.

It was only fitting that midway through the trio’s long set, they performed “Song For Our Fathers,” a tune from that not-yet-mixed, not-yet-named second CD. With very much the same intent and a bit of the feel of Horace Silver’s classic ”Song for My Father,” this piece is a tribute to guitarist Larry Coryell and keyboard players Brian Auger and Joe Sample.

In the hands of his son’s exquisite soloing, the latter track and a tune called “Purple Panther” displayed a very strong Larry Coryell melodic influence. “Purple Panther” additionally underscored the strong interaction that gives this band a jazz-based jam band sort of propulsion.

Auger’s solid drumming, alternating between delicacy and a firestorm, was an interesting contrast with his rather low-key demeanor. He and Sample provided interesting colors as they shared and shifted rhythms and melodies. The high energy of two vamp-based originals, “Walk of the Dragon” and “Rice Krispy Socrates,” also provided great improvising moments for all three players.

Coryell Auger Sample Trio is well on the way to becoming one of the more interesting new fusion bands – able to draw both from its highly credentialed jazz roots, as well as modern rock.
Posted by Ken Franckling at 8:03 PM