Add Detroit to a year of big numbers for jazz

50, 30, 55. The numbers have been all over the lot this year with significant anniversaries for historic recordings, jazz festival foundings or longevity. You name it, there’s been or will be a lot of hoopla.

Now you can add 30 and 91 with the Detroit International Jazz Festival to the mix this Labor Day Weekend.

Detroit, which bills itself as the largest free jazz festival in the U.S., is commemorating its 30th anniversary edition with a six-part suite that it commissioned from West Coast composer-bandleader Geral 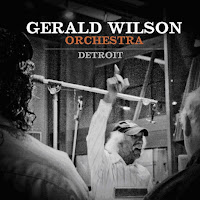 d Wilson. He and his big band will premiere the work on September 4, which just happens to be Wilson’s 91st birthday.

A recorded version, Detroit, will be released September 29 by Mack Avenue Records.
Wilson recorded the work with both his Los Angeles and New York orchestras.

Gerald Wilson calls his work a musical sonnet to the city where he spent five key years in the late 1930s. He said Detroit's progressive social policies made a huge impression on him. "The city itself showed me so much," Wilson says. "All of the schools were integrated; so was the musician's union. I had only known segregation before."
Ken Franckling at 7:35 PM